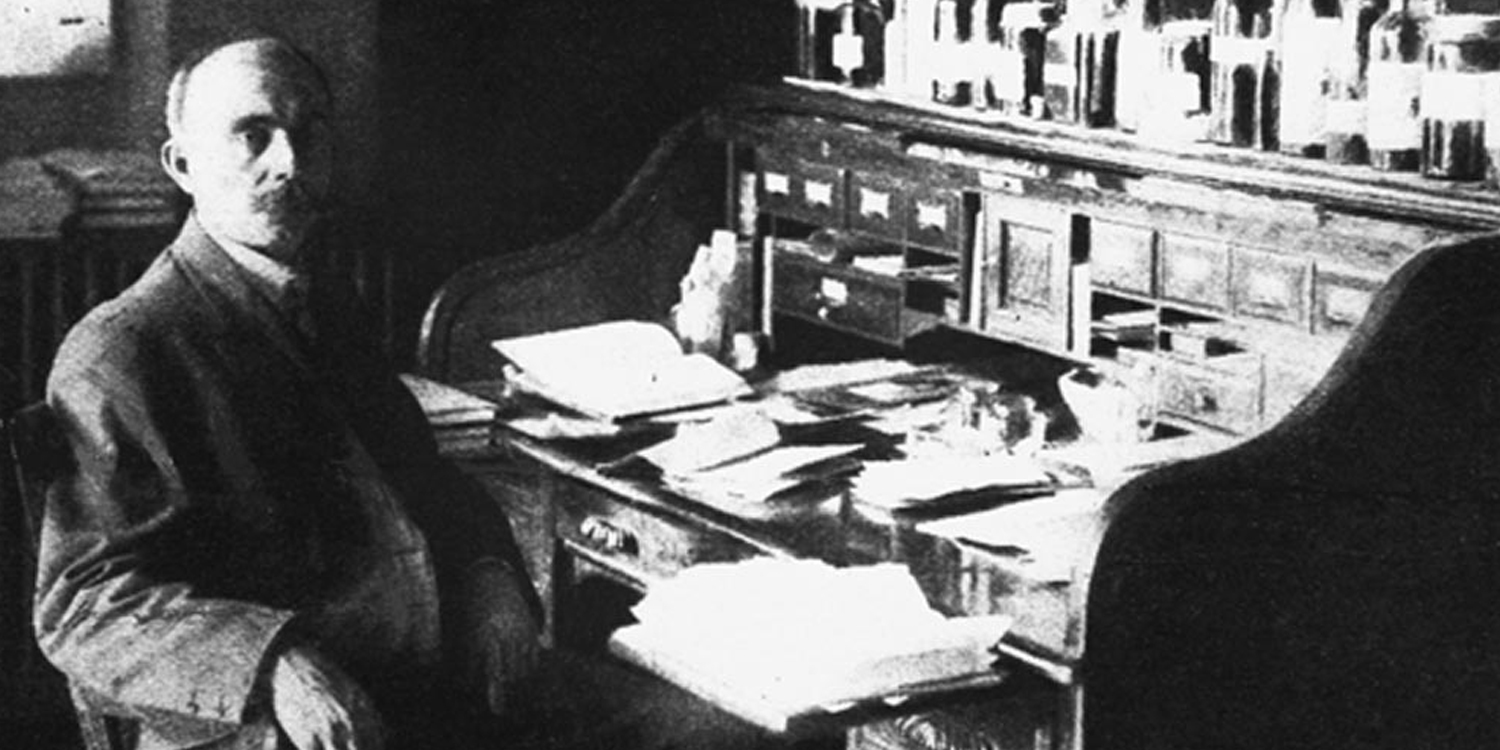 He helped invent the fly swatter and pushed through laws banning public spitting and the common drinking cup in the state of Kansas, all of which helped control the spread of communicable diseases.

He helped bolster the growth and development of disposable cups, which has evolved into a multinational, multi billion-dollar industry. He has been hailed as one of this century’s greatest public health clinicians. He is Dr. Samuel J. Crumbine, the inspiration for the Samuel J. Crumbine Consumer Protection Award. Without Dr. Crumbine’s early and dedicated commitment to improving public health practices, modern food safety and sanitation practices may not have developed in the U.S. as quickly or as effectively. Born in Venango County, Pennsylvania in 1862, young Samuel was inspired to follow a medical career after watching the local pharmacist mix medicines and practice medicine on the side. Eventually, Samuel enrolled in college, the Cincinnati College of Medicine and Surgery, and paid his way by passing out handbills that promoted the virtues of Piso’s Consumption Cure, a foreshadowing of later career developments. After a year, the young Crumbine ran out of money and then headed west to seek his fortune, or at least enough to finish medical school.

Even with his minimal medical training, Crumbine knew more about treating illnesses and mending broken bones than anyone else around Dodge City in 1885, so he hung out a shingle and started a practice. By the way, it was about this time that Wyatt Earp resigned as U.S. Marshall and Bat Masterson took over to keep the peace in the wild and woolly open plains of frontier America. The young Crumbine got to know some of these frontier legends whom he says were very modest about their fame.

After three years as a frontier doctor, Crumbine returned to Cincinnati to finish his medical training and earn the “Dr.” that would forever after attach to his name. During this time, he met his wife Katherine whom he later married shortly after his graduation. The newlyweds returned to Dodge City where Dr. Crumbine re-started his medical practice. The chronicles of the time are replete with stories of the young, feisty doctor strolling the streets of Dodge City resplendent in a Prince Albert coat and a holstered six-shooter. He bullied his patients into practicing good health habits, scolded victims of gunshot wounds (“Why didn’t you duck?”), and generally earned the respect and loyalty of the townspeople.

It was around this time that Dr. Crumbine made his first mark on the annals of public health history. Being a frequent customer of Fred Harvey’s diner in Dodge City, the young doctor took exception to the diner’s practice of serving milk from open jugs or pitchers. He eventually convinced the diner’s management to serve patrons milk in individual bottles, a far safer and more sanitary practice of dispensing milk. It was a first, according to medical professionals of the time, and a first major accomplishment of the crusading Dr. Crumbine.

The next target for Dr. Crumbine’s ire was the community pesthouse, where victims of communicable diseases (i.e., smallpox, cholera) were quarantined until they either died or recovered. All other residents in the town were quarantined in their homes, a practice which could devastate a community’s economy. After an outbreak of smallpox in Pratt, Kansas, the good doctor decided to take a stand against these practices. He ordered the ill to stay at home until they recovered and vaccinated the rest of the community’s residents. The townspeople would be protected from exposure to the illness and its commercial enterprises could continue. The day of the pesthouse was coming to an end.

Dr. Crumbine’s highly publicized success with eliminating pesthouses earned him statewide recognition and a new job as head of the state of the Kansas Public Health Board.

In that post, his first crusades were against food and drug manufacturers. He had the Board’s chemist test every food and drug sold in Kansas against advertisers’ claims, which were largely unregulated at the time. His discoveries were, to say the least, enlightening. For example, he found that one remedy, which claimed to cure “all nervous troubles,” contained about 75 percent alcohol. Another potion, which promised to cure 18 diseases, some of which were incurable, contained a high percentage of turpentine. Not to be unkind, Dr. Crumbine recommended the remedy as an excellent paint thinner. He also went after foods that contained contaminants (rodent hair and parts, wood slivers). One crusade against preservatives in food produced a model regulation which found its way into the nation’s first Food and Drug law. This series of public health initiatives transformed the “colorful” Dr. Crumbine into a figure of considerable controversy. The little doctor from Kansas had become a bothersome nuisance.

Undaunted, Dr. Crumbine then took on some of his most challenging public health enemies. In 1905, he went after the common housefly, which he knew from the research and medical exploits of Dr. Walter Reed and others during the Spanish-American War was a primary source of typhoid fever. Since incidence of that disease was rising at the time, Dr. Crumbine launched an aggressive campaign to wipe out flies in Kansas. The campaign slogan “swat the fly” caught the attention of schoolteacher Frank Rose who showed the doctor his fly killing invention, a crude implement made of a yardstick with a square of wire mesh on one end. He called it a “fly bat,” but Dr. Crumbine came up with a catchier name, the “fly swatter.” The name and the invention caught on, first in Kansas, then across the country, and then around the world.

Dr. Crumbine’s next target was tuberculosis. Incidence of that disease was also climbing, despite efforts to keep it reined in. Then one day while riding on a train across Kansas (the Missouri Pacific), Dr. Crumbine noticed that a number of the passengers were tuberculosis victims on their way to drier climates for treatment. To his horror, he watched as several of those passengers drank water from a common drinking cup which healthy passengers shared. When a healthy little girl drank from the cup, Dr. Crumbine jumped out of his seat, snatched the water vessel and cup from the wall, declaring that both would be banned by the state. And, they were.

Banning the cup created a problem, however. What would take its place?

Fortunately (for the future foodservice disposables industry), Kansas-born, Harvard-educated Hugh Moore had invented a cone-shaped paper cup in 1904 that he presented to Dr. Crumbine as the answer to the problem. Hence, the “Health Cup,” later to be called the “Dixie Cup,” took its place on trains, in movie theaters, and other public places where water fountains were found.

Bolstered by that success, Dr. Crumbine then took on roller towels, another source of many forms of bacteria, and the common practice of spitting on the sidewalk. The latter became the subject of another statewide campaign, which did not go over at all well with the public. But, the feisty Dr. Crumbine persisted. Once again, his crusade was aided from an unexpected source, a Topeka bricklayer who carved the “no spitting” slogan in every sidewalk he laid, a constant reminder to pedestrians not to expectorate.

Dr. Crumbine passed away in 1954, leaving a lifetime legacy of contributions to public health that has rarely been equaled. The Award, which carries his name, is not only a tribute to Dr. Crumbine’s life and his accomplishments, but is a standard against which excellence in public health services is measured. If Dr. Crumbine was still alive, he would no doubt toast the Award winner with a Dixie Cup of champagne.